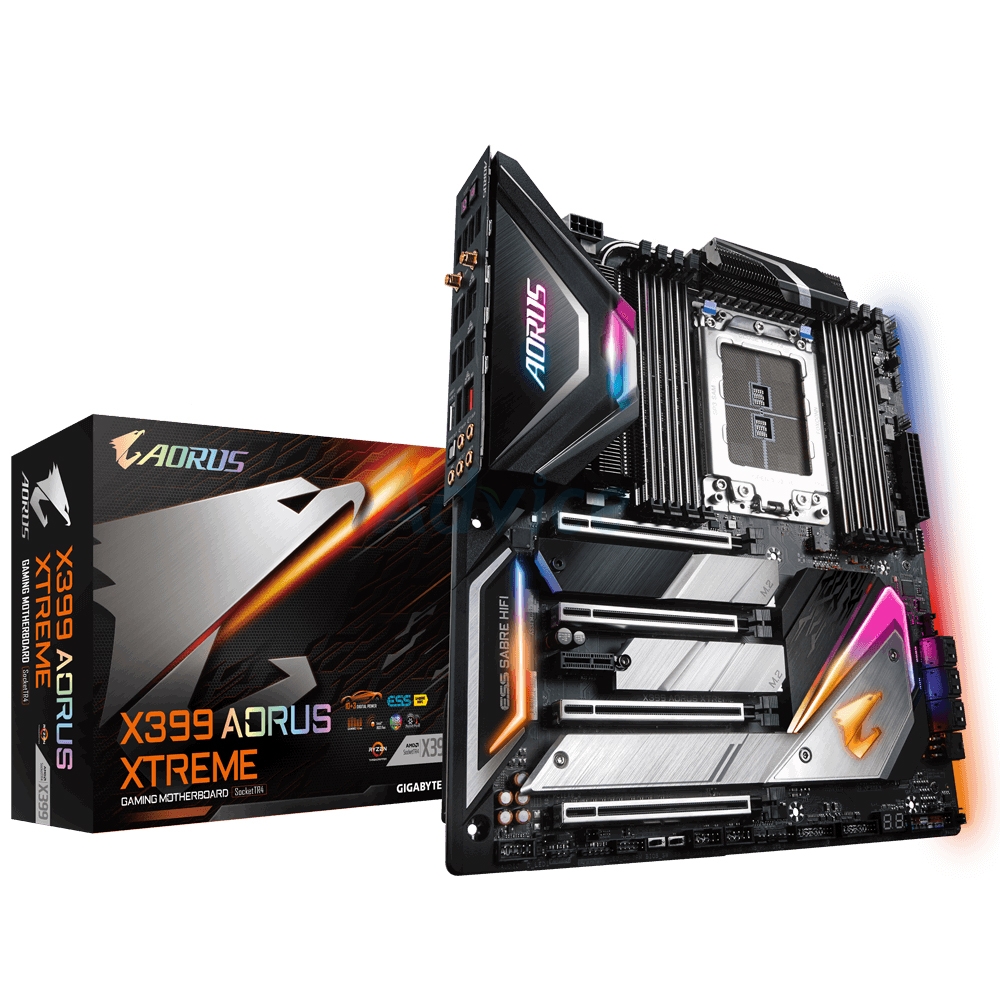 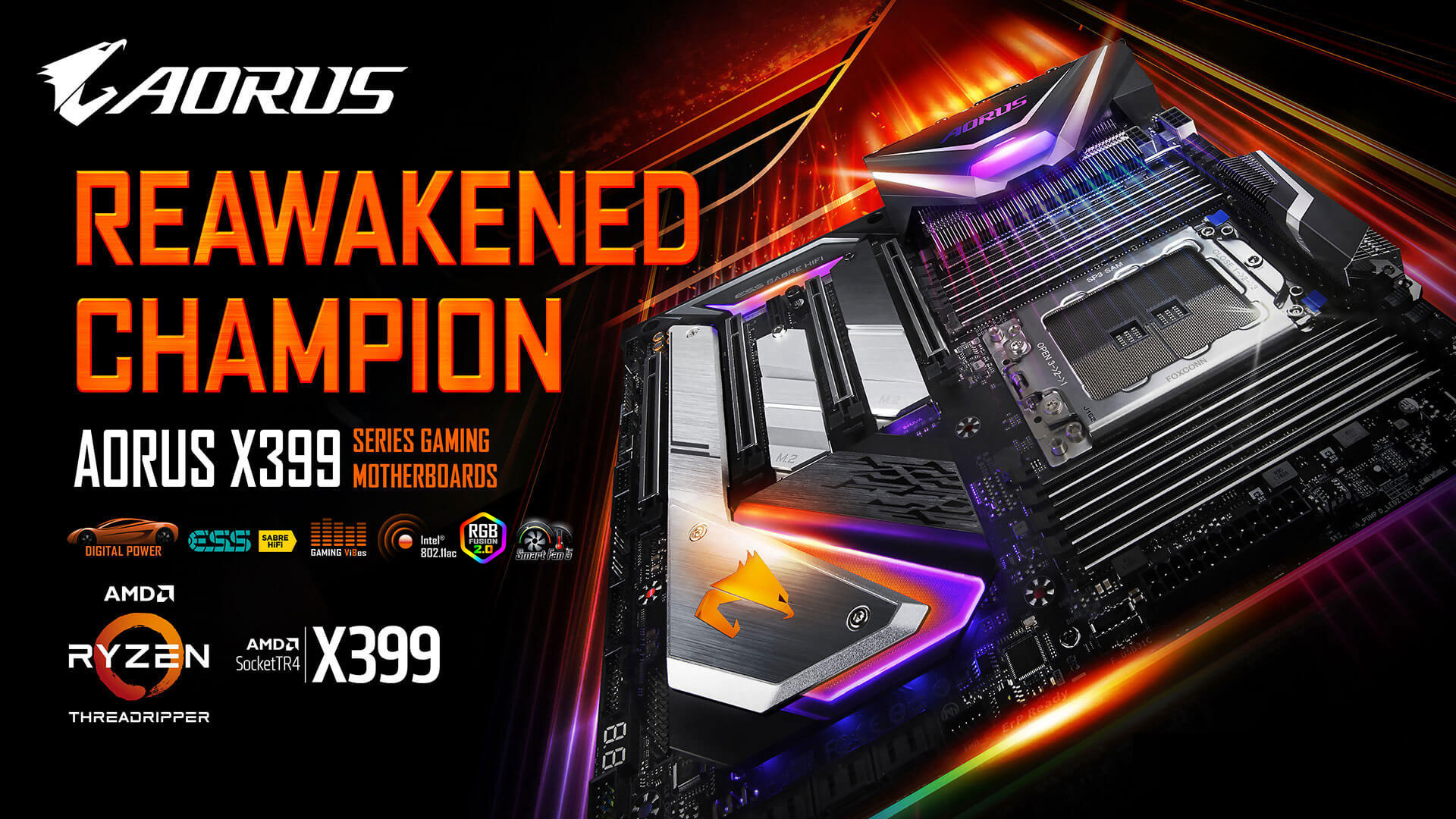 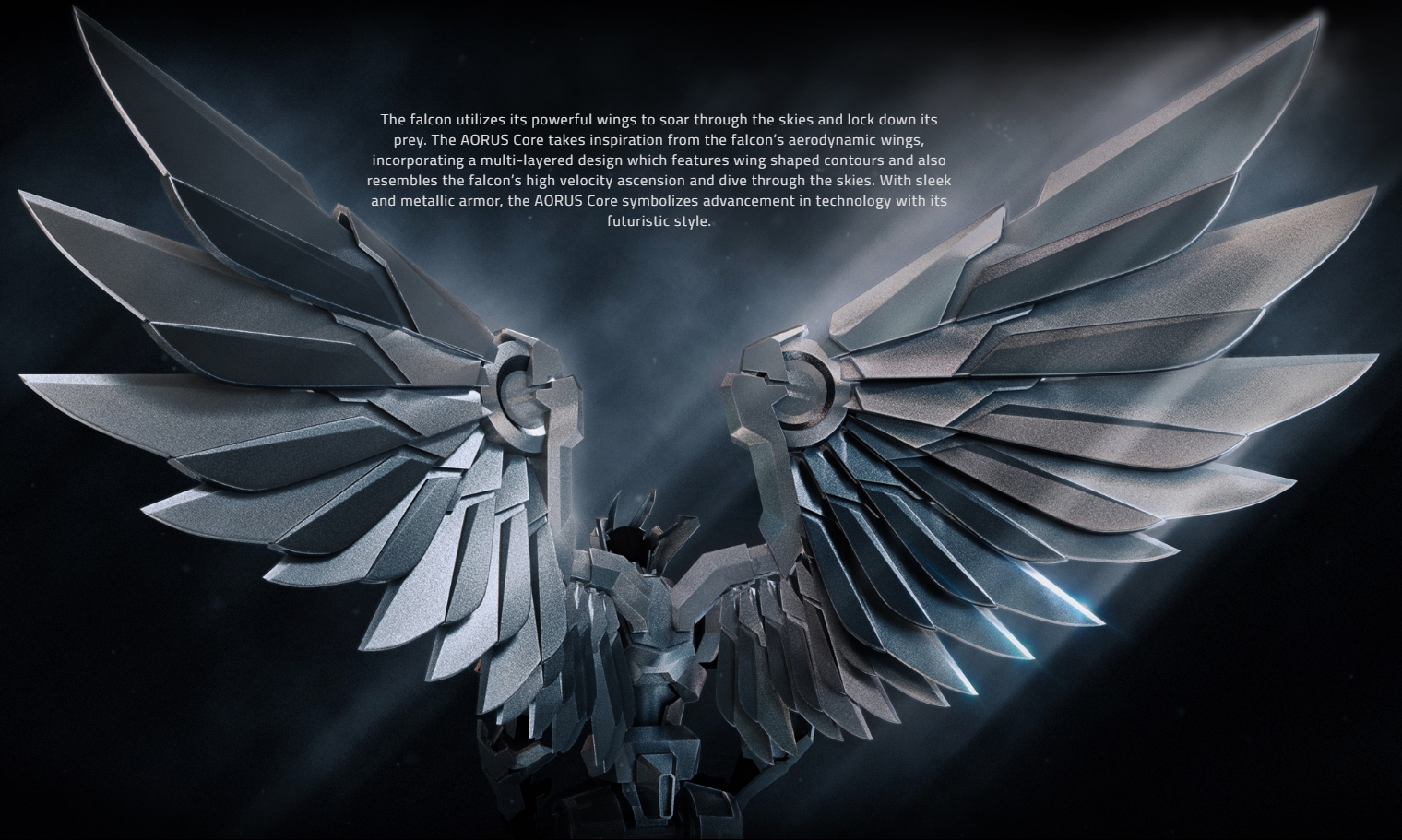 X399 AORUS XTREME stays faithful to AORUS design principles with the contour of its armor resembling the falcon’s dominant ascension into the skies, capturing the prowess and attitude of the falcon in flight. The LED zone on the I/O armor can be likened to the windshield of futuristic spacecrafts, symbolizing advancement and an eye into the future of technology.

With up to 32 cores, the 2nd Generation of AMD Ryzen™ Threadripper™ processor can command 64 threads, the most multi-processing power that has ever been unleashed on a consumer desktop. Overwhelm your workloads with 64MB of L3 cache, without sacrificing.

Quad-Channel DDR4 for devastating memory bandwidth, 64 lanes of incredible PCIe Gen3 connectivity, and native USB 3.1 Gen2 10Gb/s support on a chipset. With every processor multiplier-unlocked to be configured as you see fit, GIGABYTE X399 AORUS XTREME is perfectly designed to support the 2nd Generation Ryzen™ Threadripper™ 250W processor to offer you the latest advancements in motherboard technology. 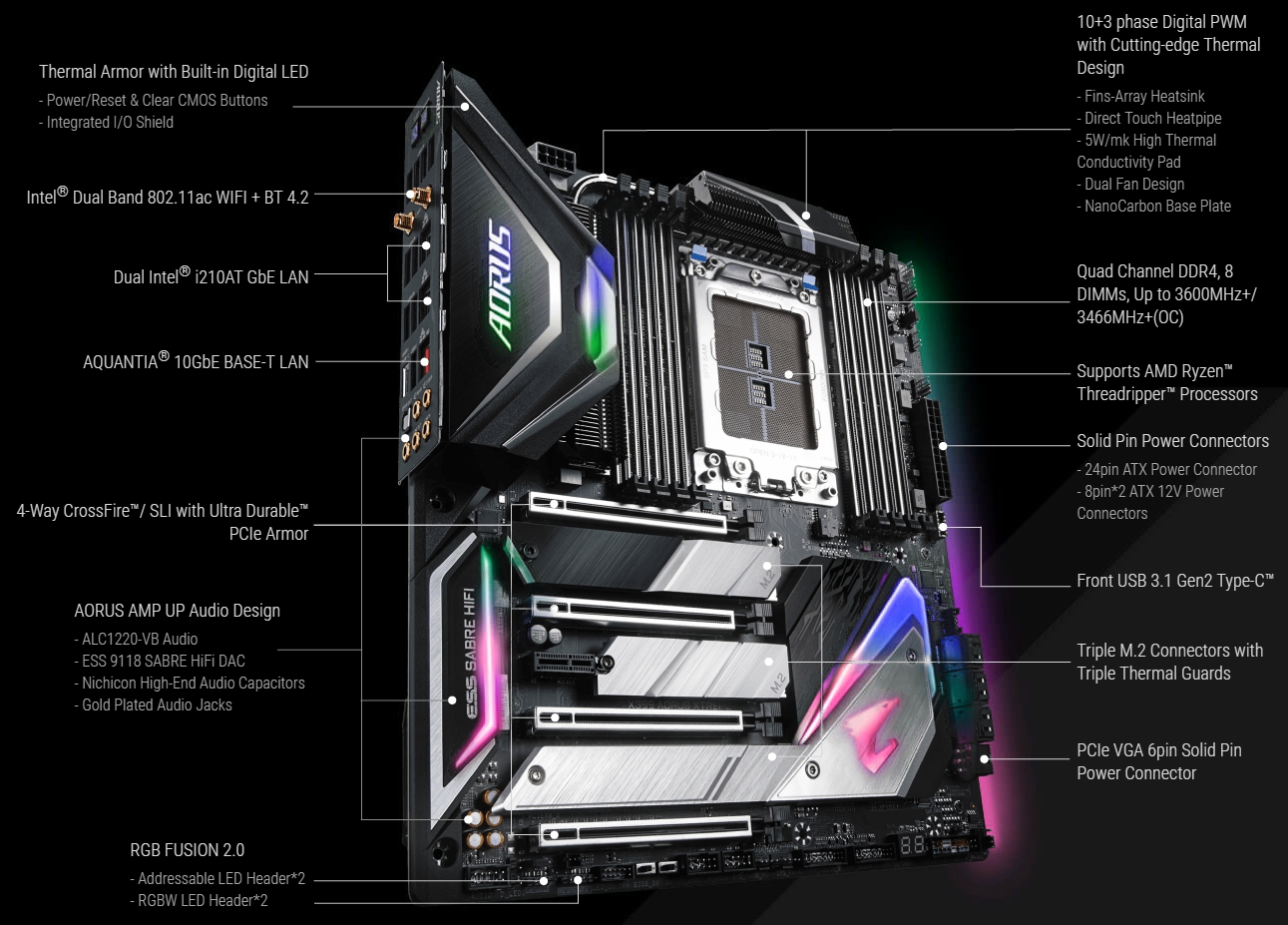 X399 AORUS XTREME motherboard uses an all IR digital CPU power design which includes both digital PWM Controllers and PowIRstage MOSFET, capable of providing at least 50A of power from each phase, for a total of 650A.

These 100% digital controllers and additional 8+8 Solid-pin CPU Power Connectors offer incredible precision in delivering power to the motherboard's most power-hungry and energy-sensitive components, allowing enthusiasts to get the absolute maximum performance from the new 2nd Gen. AMD Ryzen™ Threadripper™ processors. 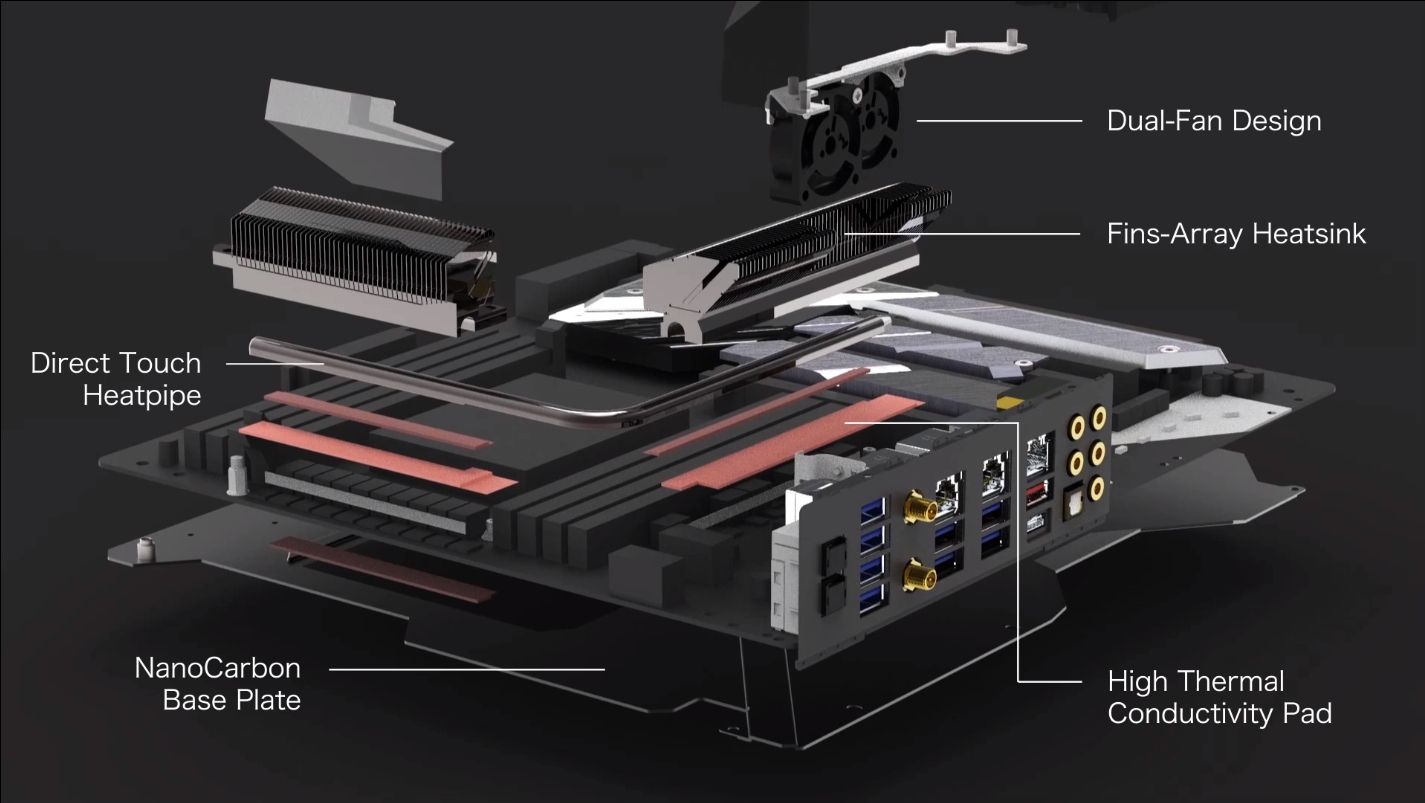 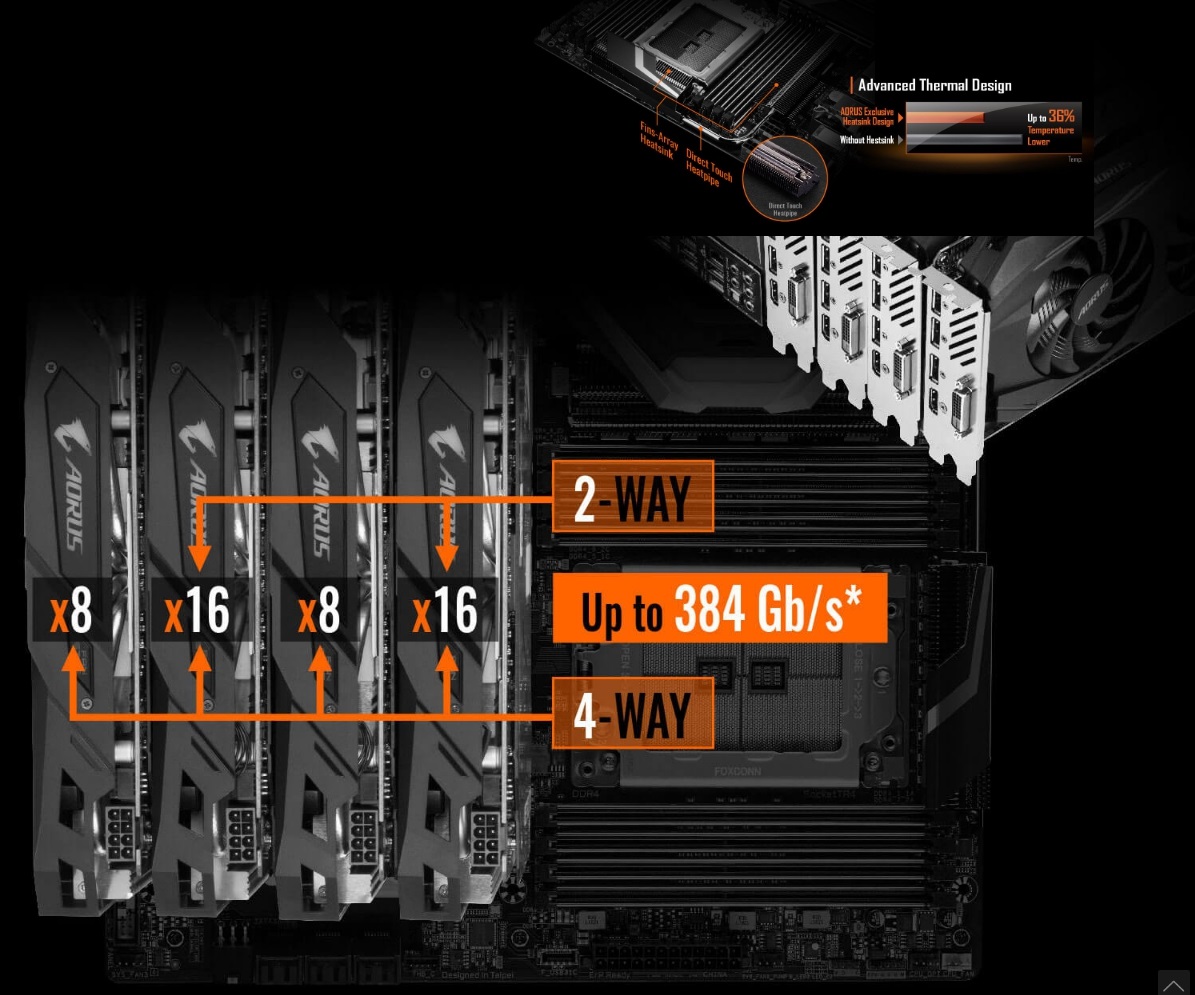 - By using a high 5 W/mK thermal conductivity pad, it can transfer 2.7x more heat than traditional thermal pads in the same time period.

AORUS X399 motherboards feature a unique PCI Express design that utilizes 100% of all 48 lanes from the CPU when in a 4-Way or 3-Way graphics configuration providing the full bandwidth available and provide the best graphics bandwidth possible to the user. 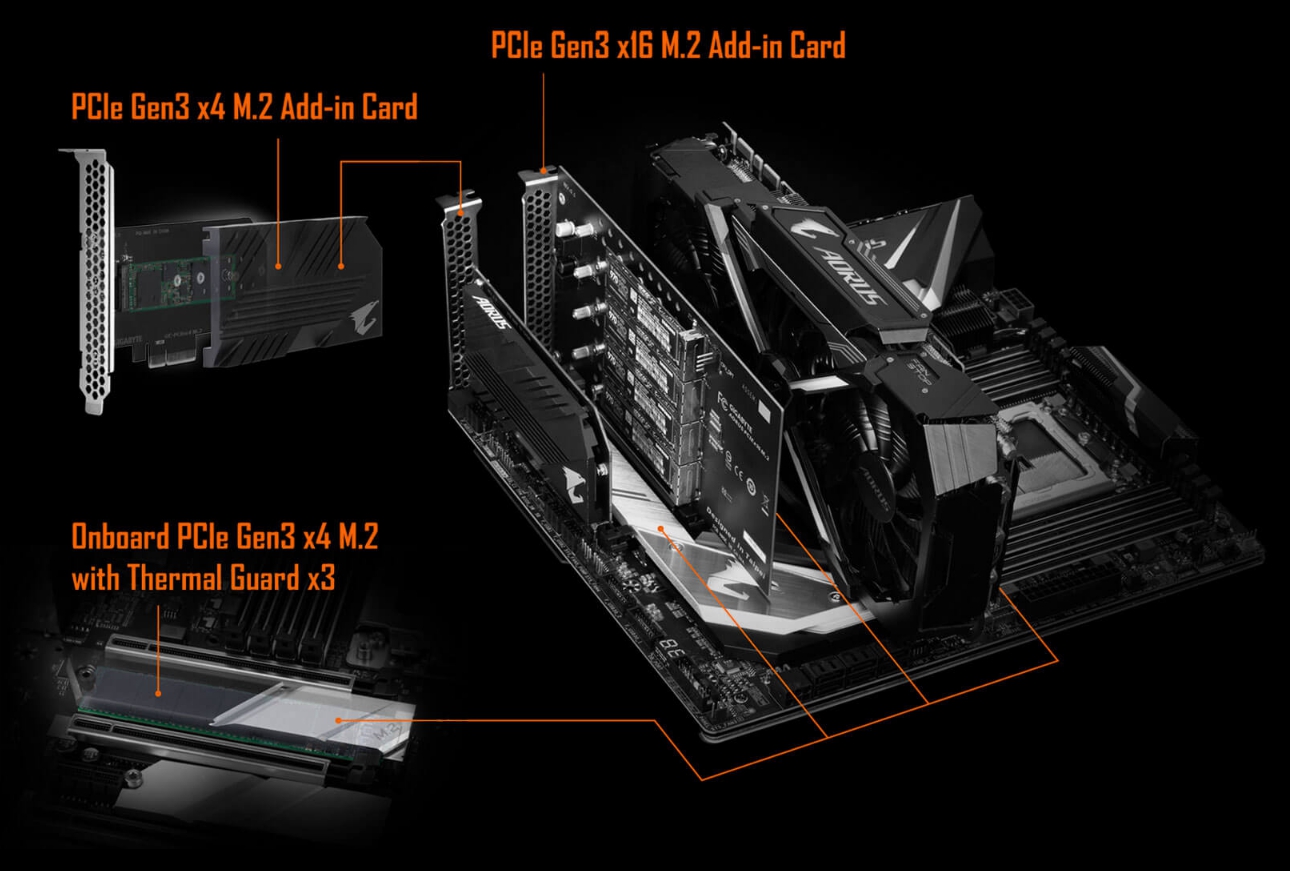 NVMe RAID for AMD Ryzen™ Threadripper™ platform is now supported for free. By combining multiple NVMe SSDs together into a RAID 0, 1, or 10 array, it is possible to greatly enhance disk performance or data integrity. With a single GPU in the system, up to 8 NVMe SSDs array can be supported by AORUS X399 motherboards. 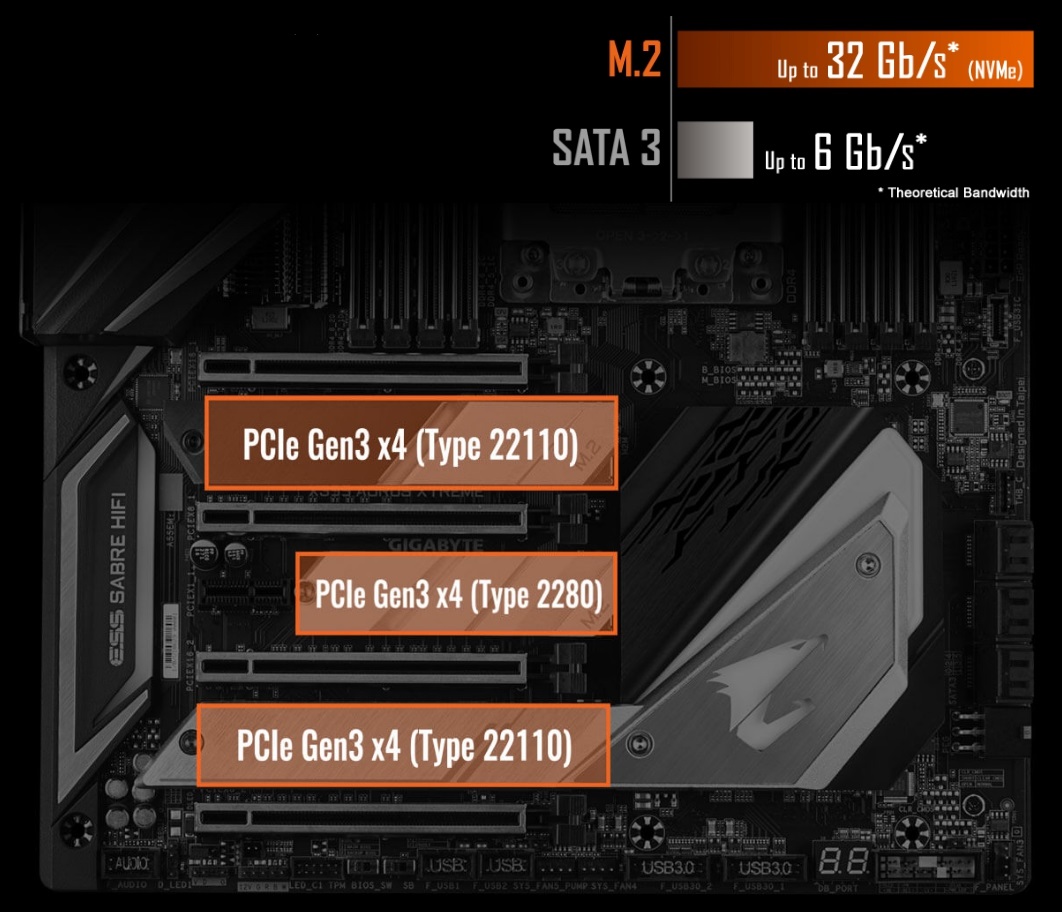 AORUS X399 Motherboards are focused on delivering M.2 technology to enthusiasts who want to maximize their system’s potential. 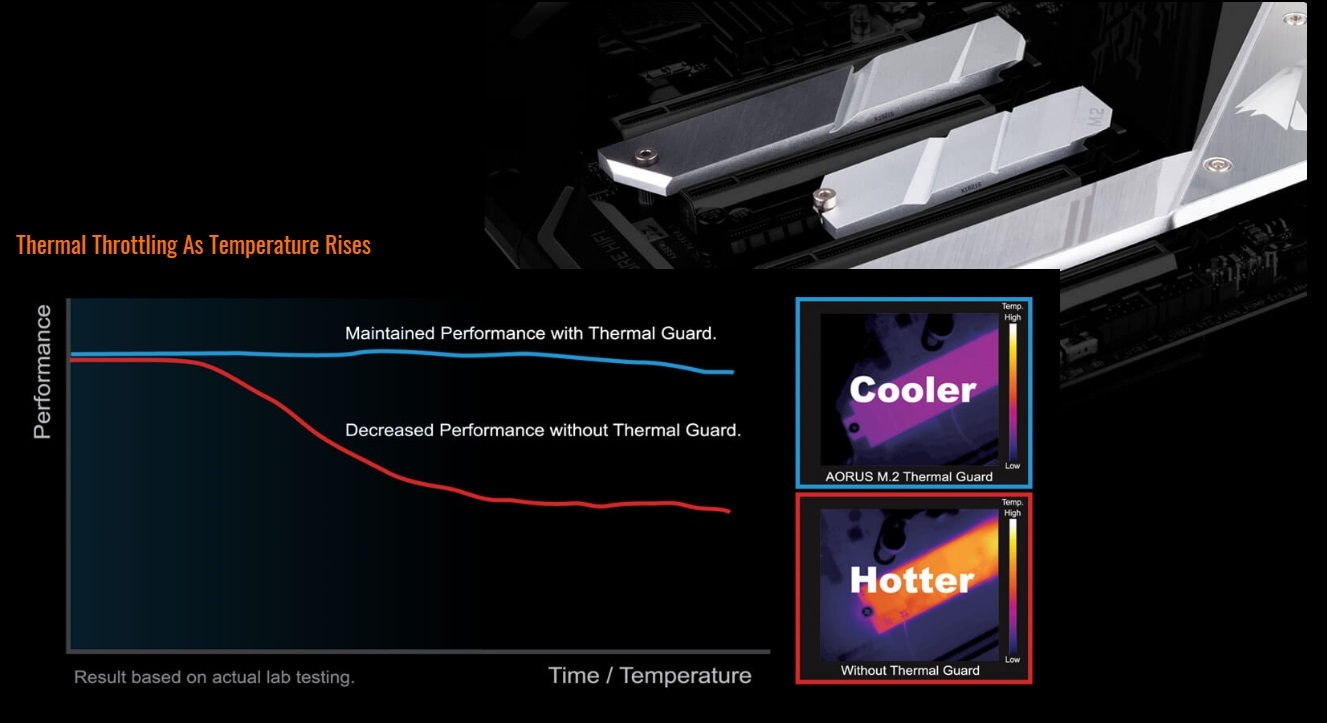 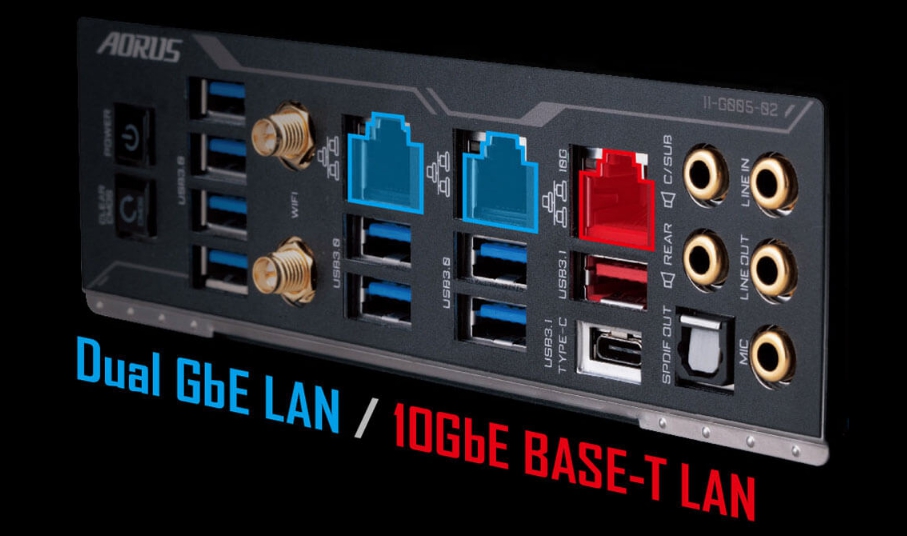 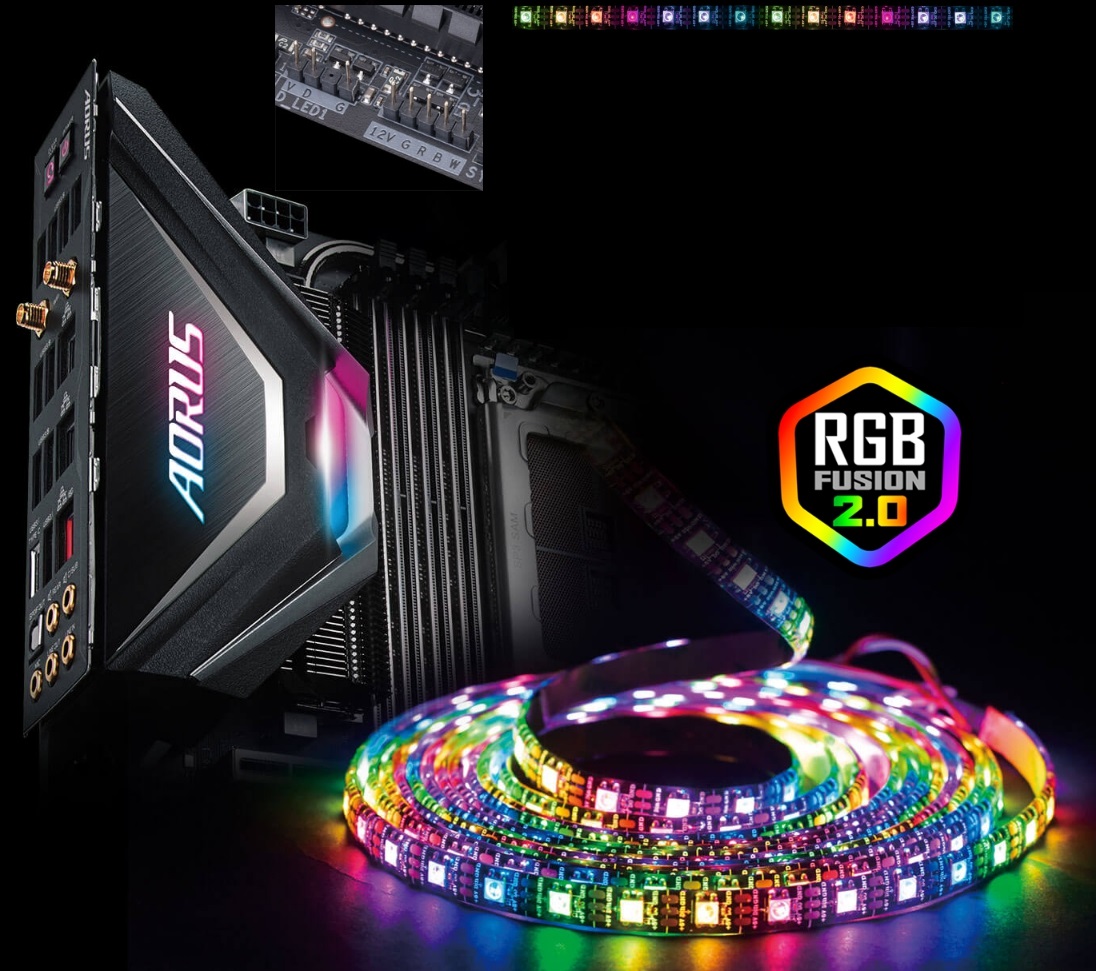 AORUS Gaming Motherboards will support either 5v or 12v digital LED lighting strips and up to 300 LED lights. RGB Fusion 2.0 with Digital LEDs comes with 9 new patterns and various speed settings with more to come. 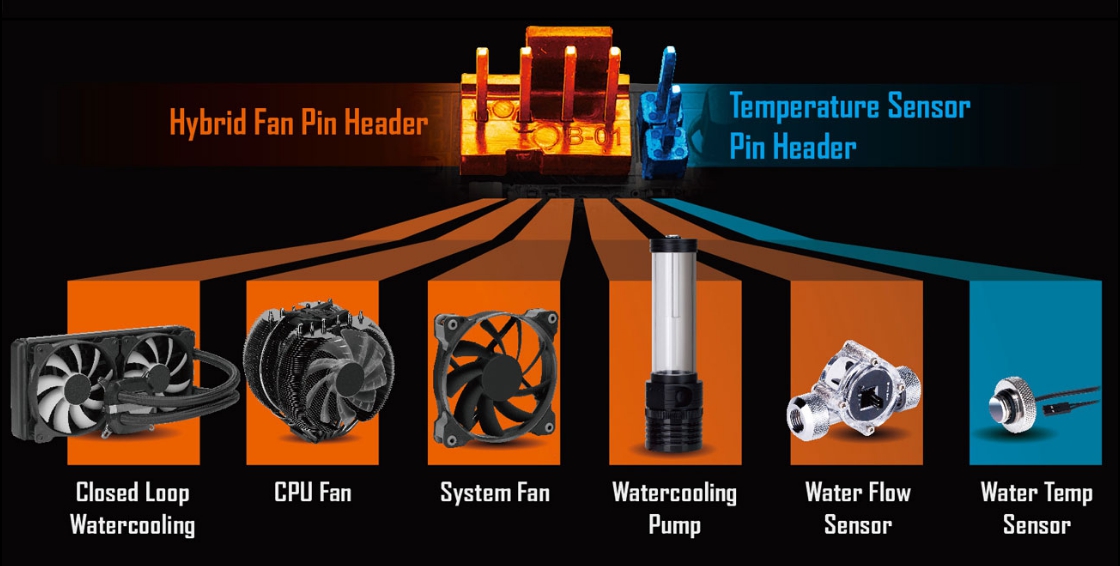 Assume complete control over your liquid cooling setup! Smart Fan 5 receives up-to-the-second information on flow-rate and water-temperature through the Hybrid Fan Pin Headers or external thermistor sensors—giving you absolute mastery over your PC.

- All Hybrid Fan Headers can automatically detect the type of cooling device whether it be fan or pump with different PWM or Voltage mode. 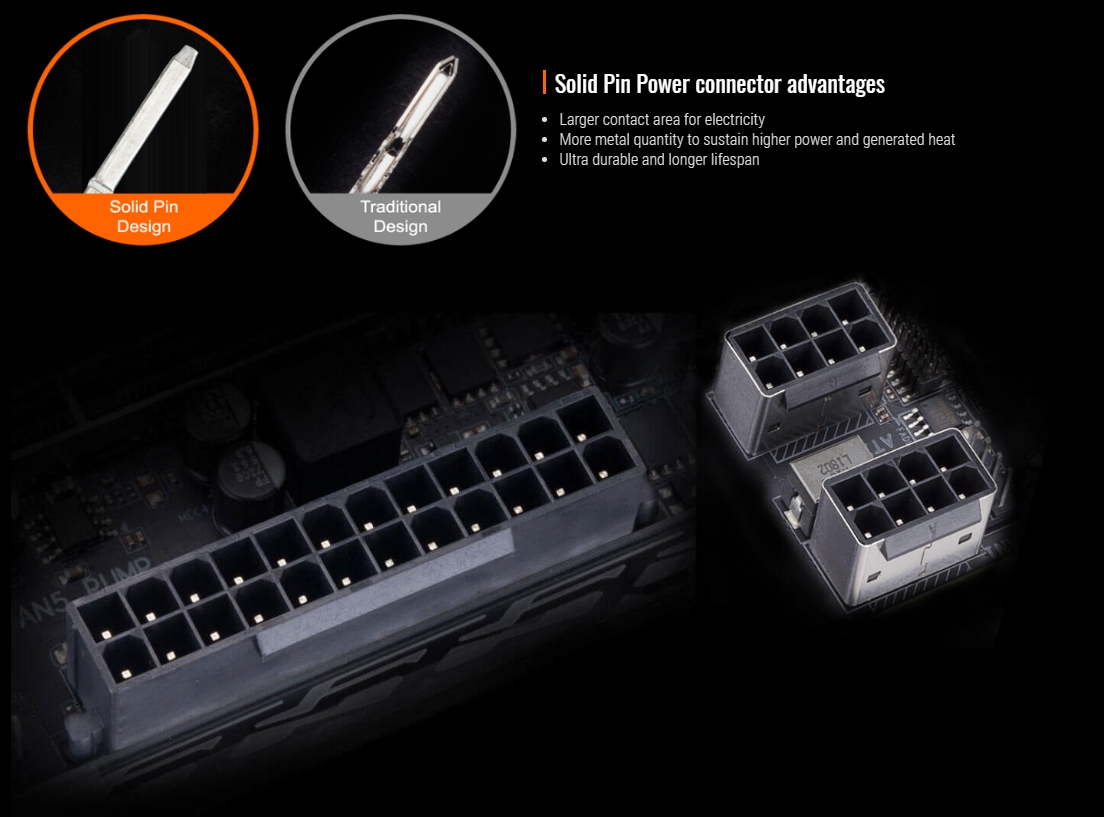 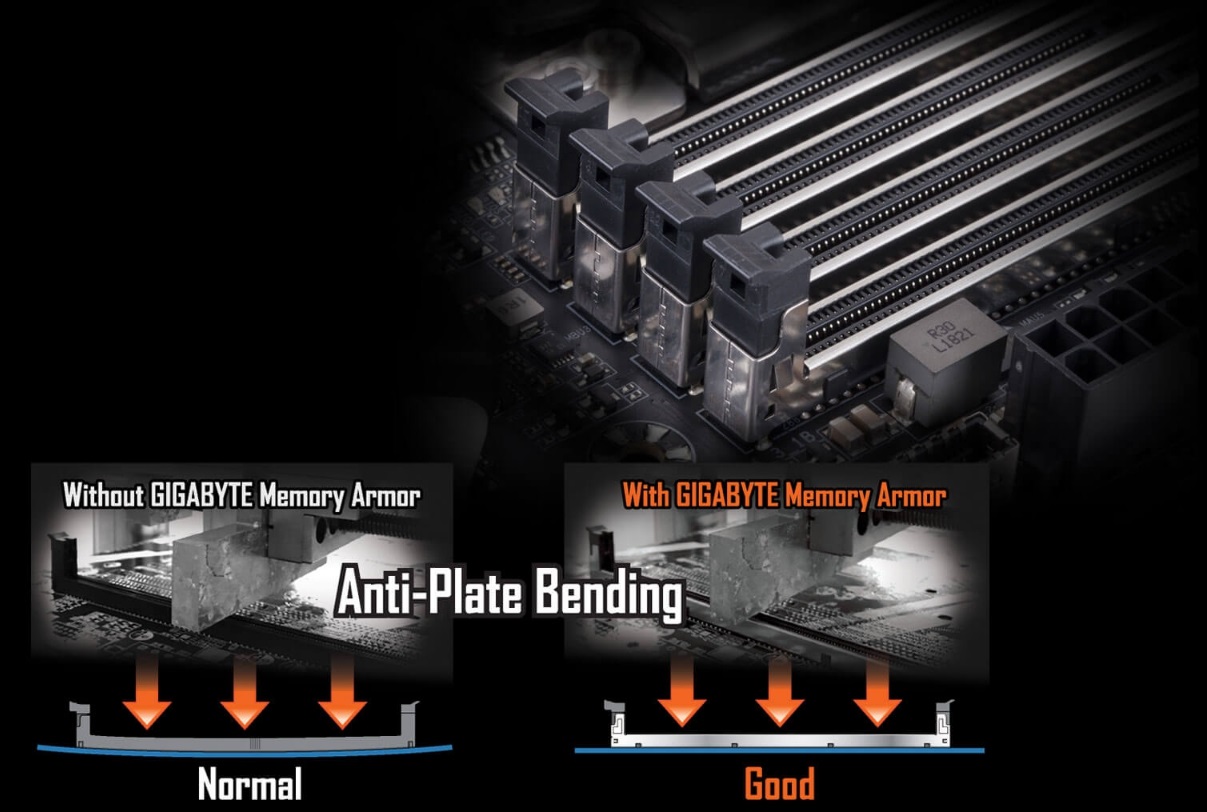 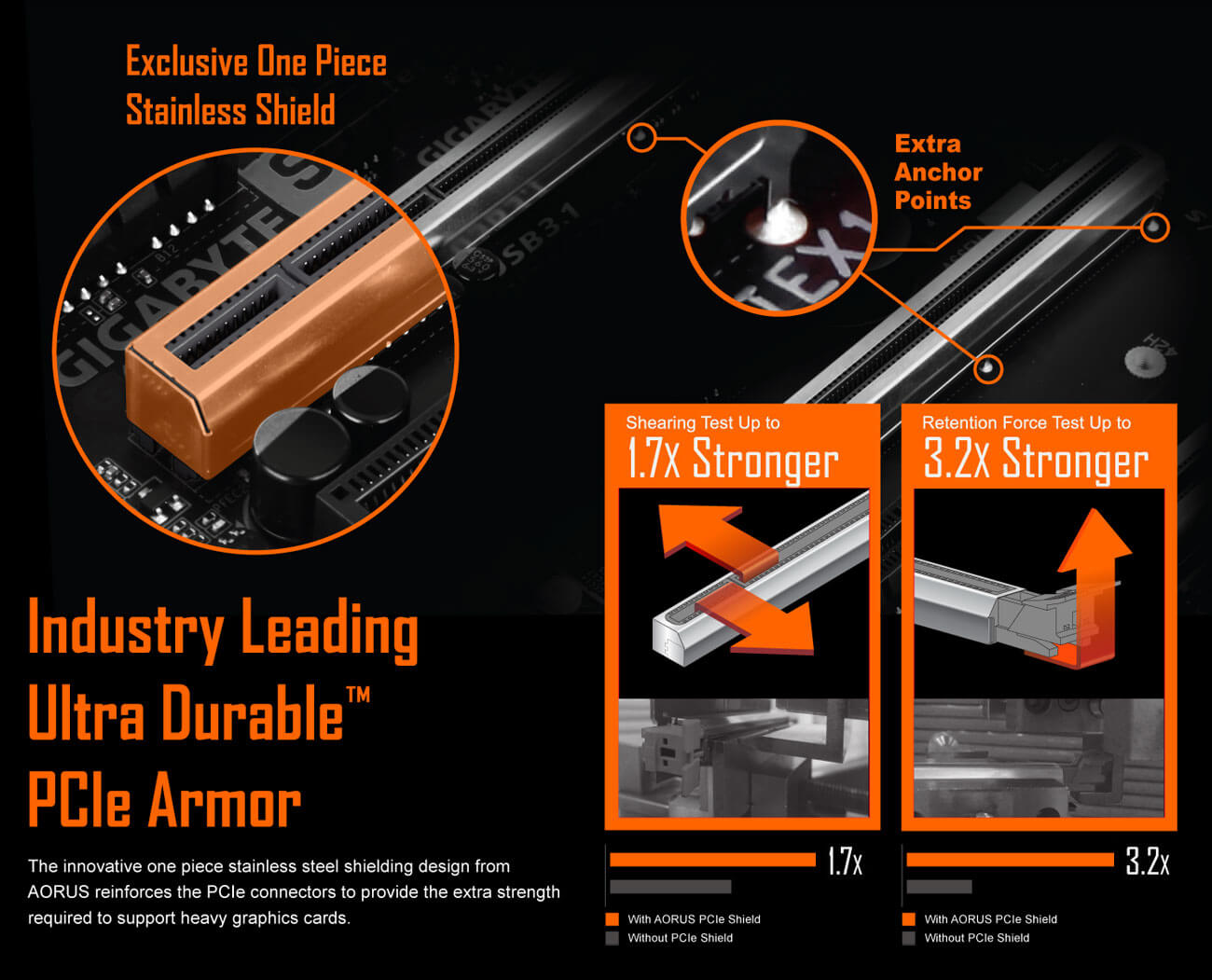 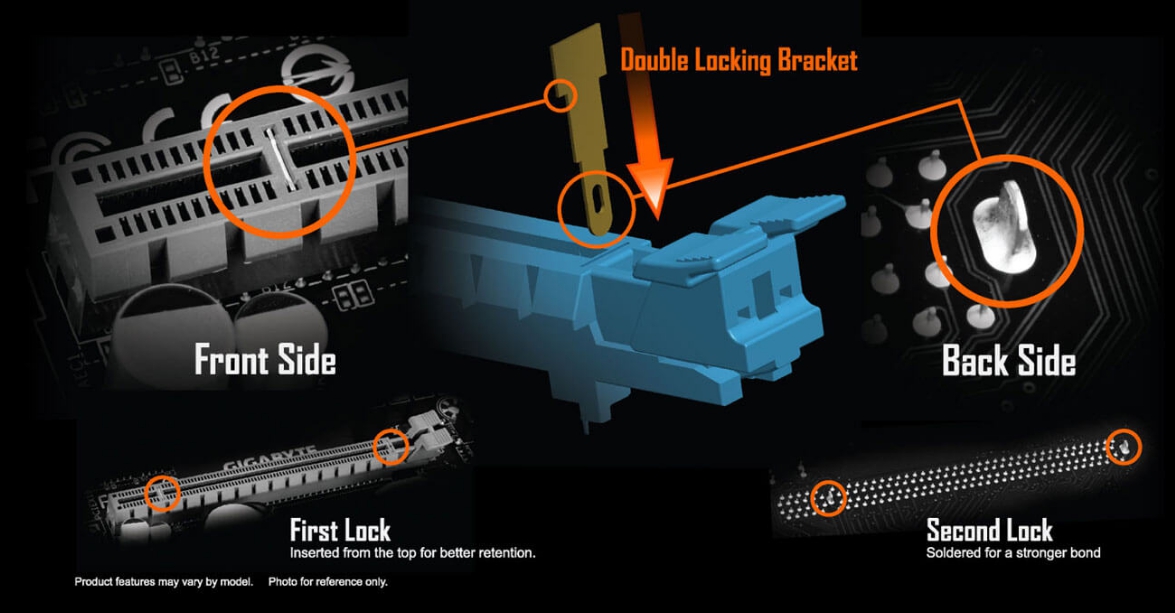